Latest posts by Kytten (see all) 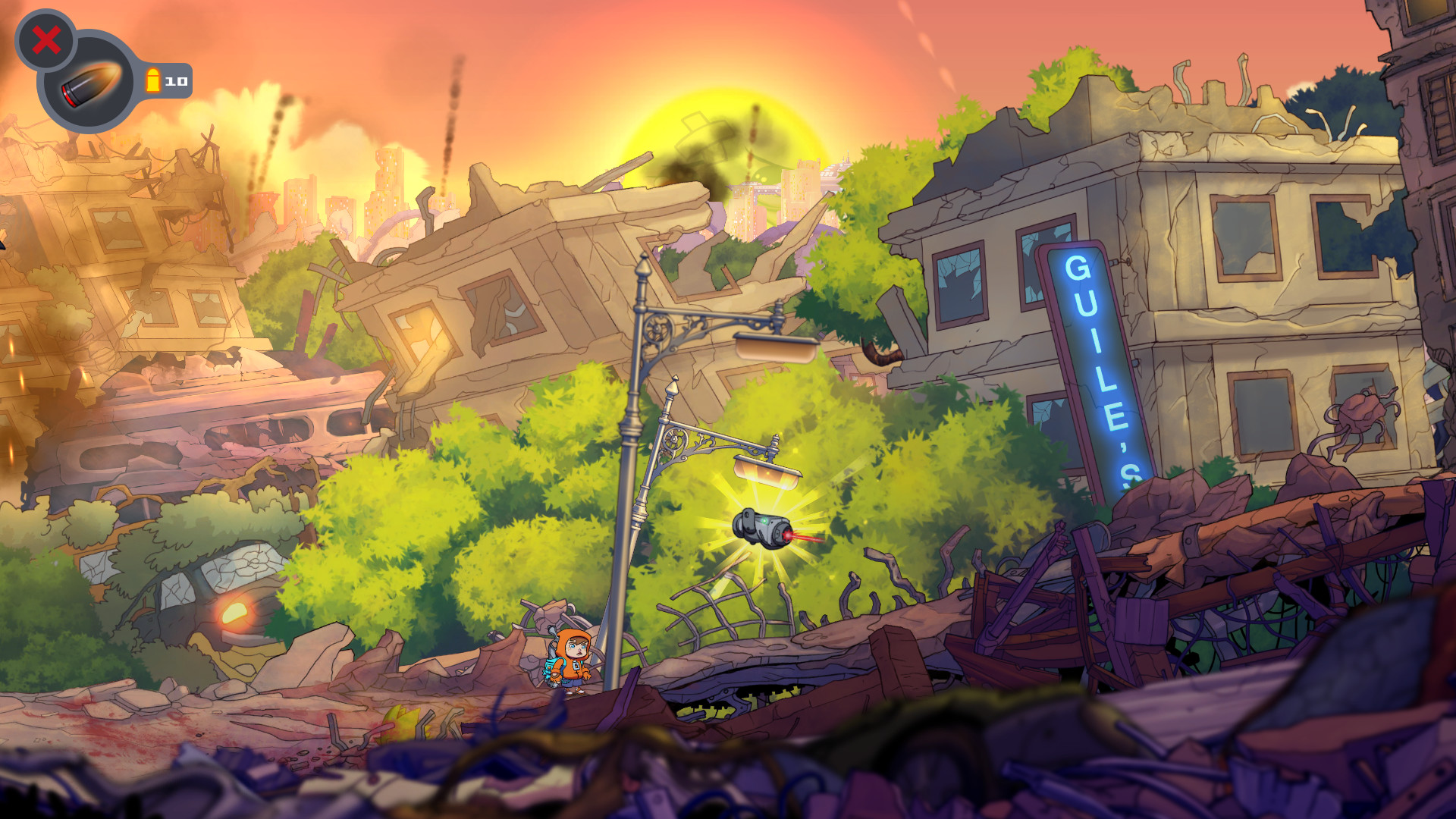 Rise & Shine is a puzzle action platformer with some bullet hell thrown in from Super Mega Team and Adult Swim Games. It follows the journey of Rise as he is thrust into the life and death battle for Gamearth. when the legendary warrior dies in front of him. The legendary warrior entrusts Rise with Shine, an intelligent weapon that grants infinite respawns. It boasts a bunch of references from other games and a rich story. I was pleasantly surprised overall by my experience with the game and let me tell you why. 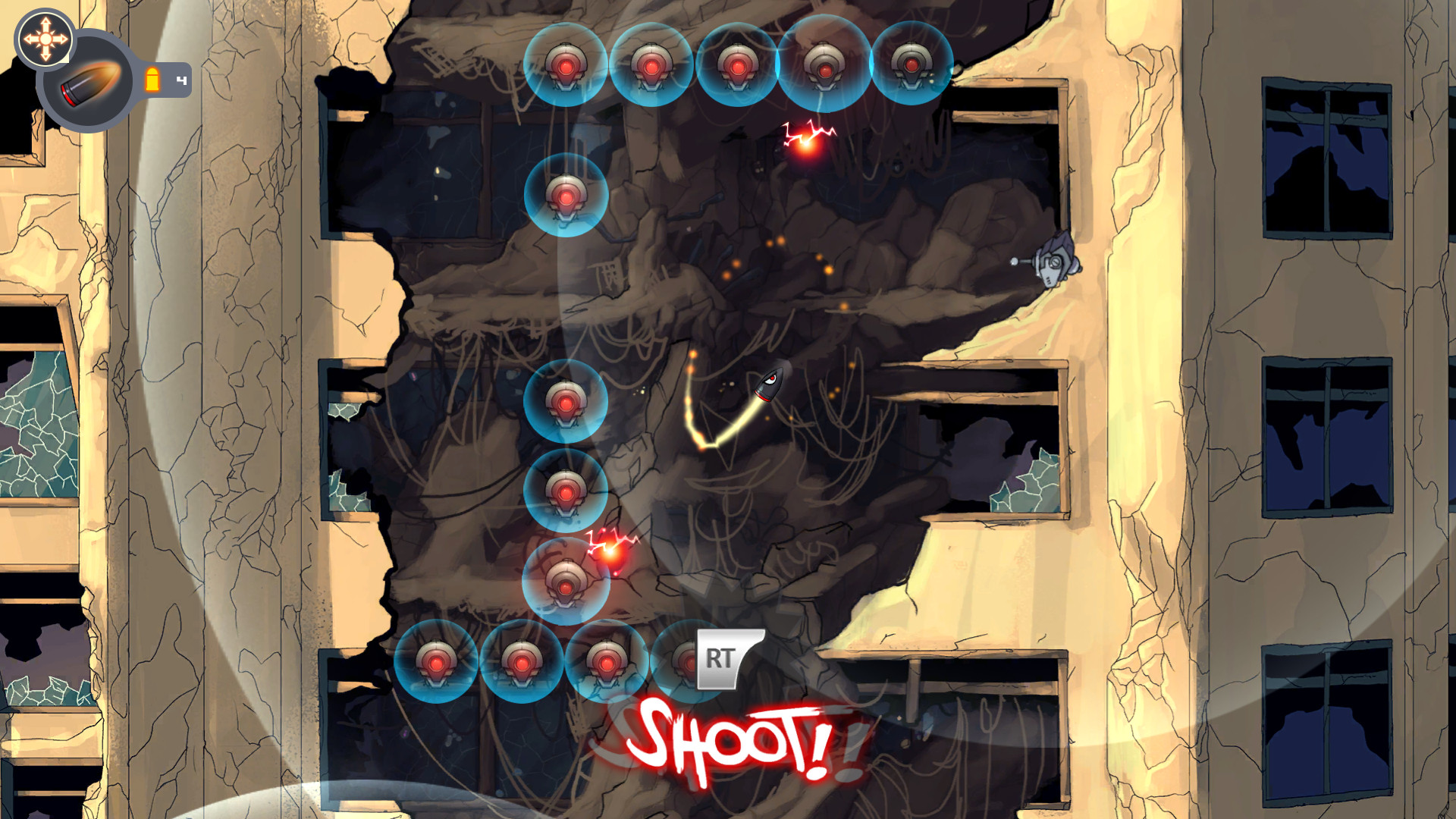 First up let’s cover the gameplay basics, of which I will cover up to the first boss and part of the 2nd level. The game brings some very interesting gameplay to the table with how you attack. Not only do you just shoot at enemies, but you can switch between normal fire and a Remote Control (RC) fire mode. During RC mode you can control the path of the bullet in a small area around you, which allows you to hit things you would not be able to otherwise. Not only that, but through the game there will be area extenders which you use to solve some puzzles. 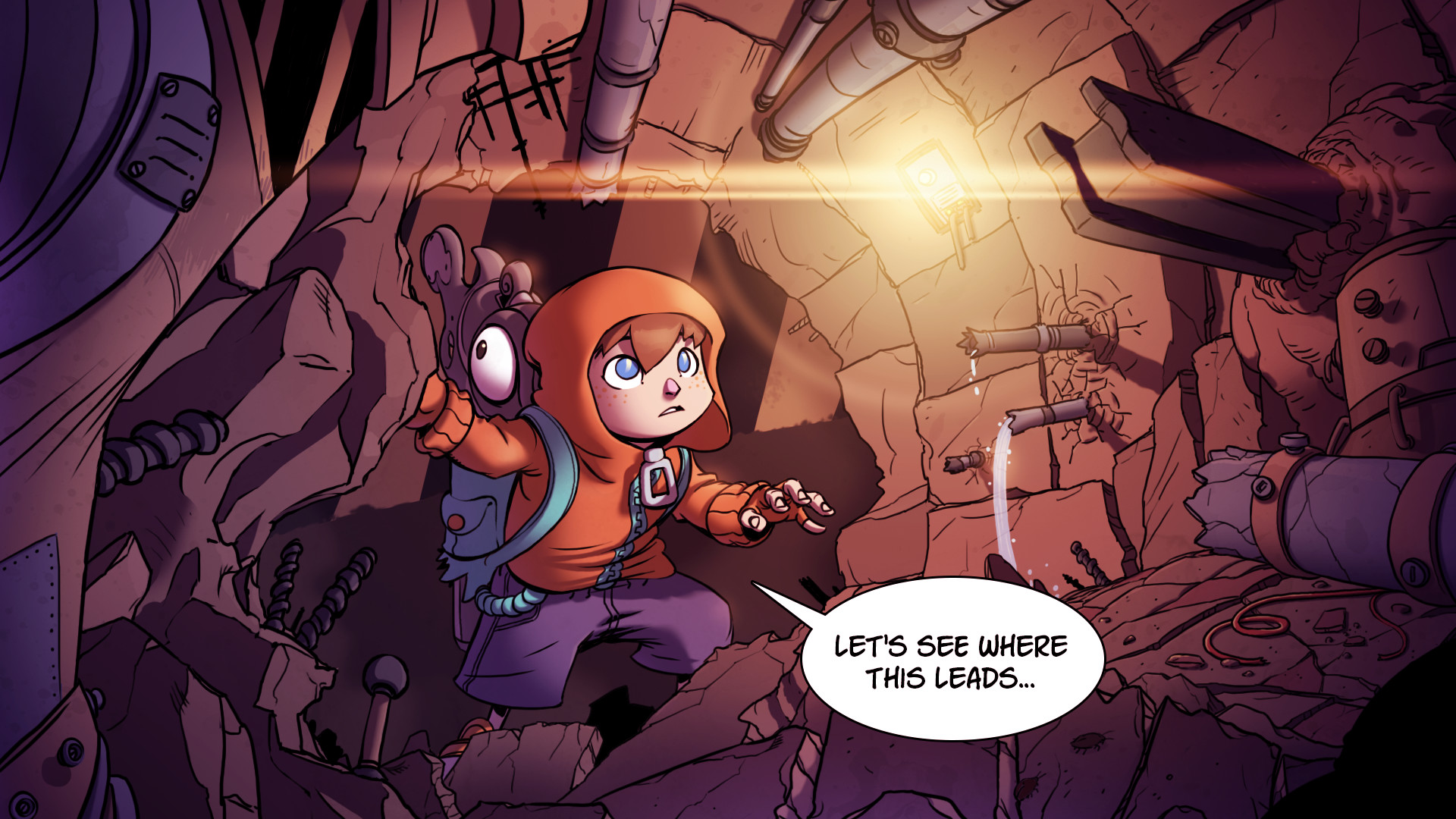 You also have two bullet types, the normal ones, and electric bullets which can shock non-robot enemies and really mess with robot/mechanical ones. For example, on the 2nd level near the start there is spot where there is a bunch of flying robots and a grunt firing at you. You can use the electric shot to stun the grunt and to destroy the robots so you don’t have to duck behind cover to avoid the shots from the grunt. As far as solving puzzles goes, an example I can give you happens on the first stage. There is a spot where you have to use an RC bullet to transverse a maze, avoiding the walls. 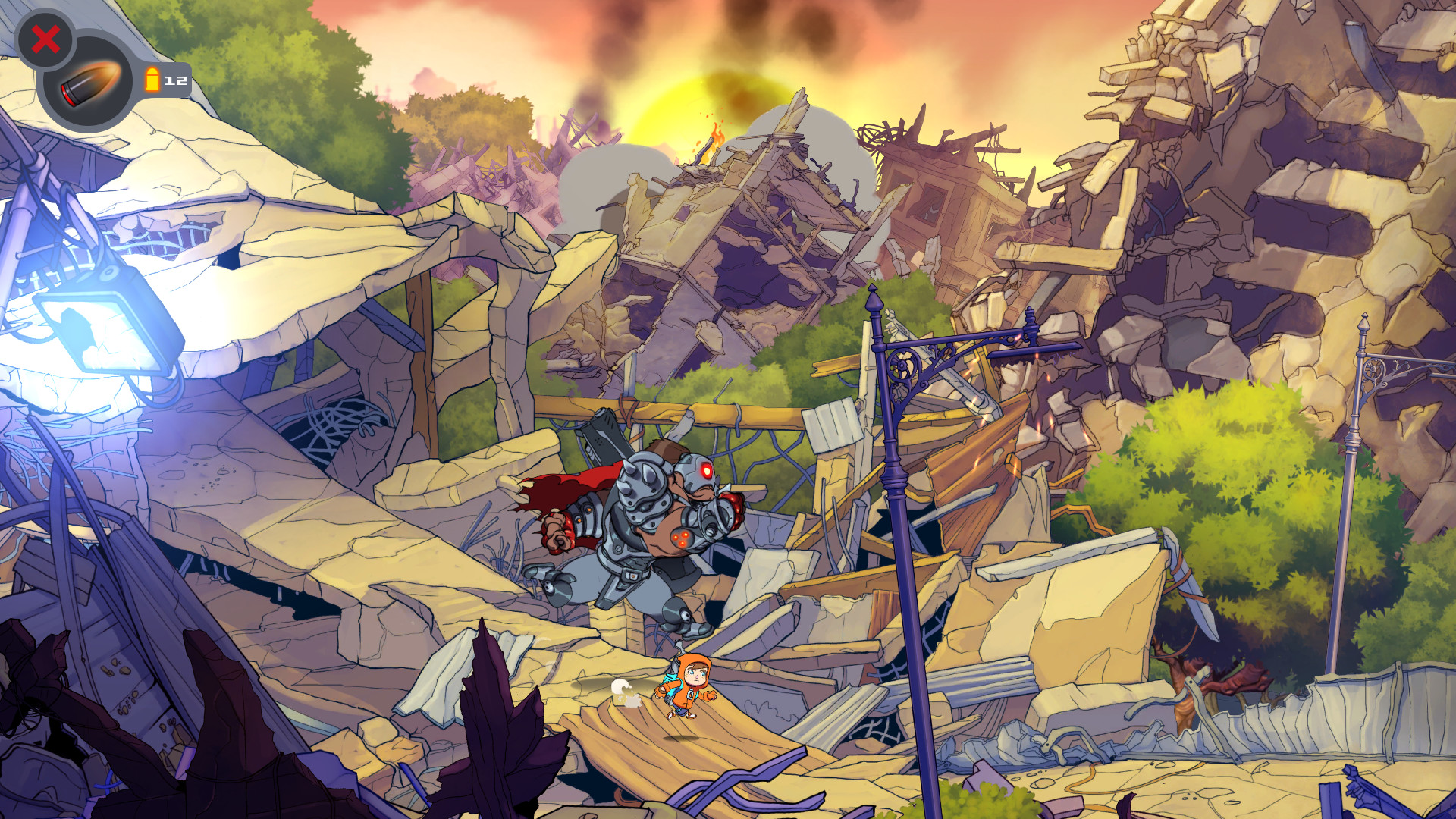 During this there is also moving shield robots that can block your way. You have to successfully avoid them to hit a button to open the door so you can proceed. That sums up the gameplay other than shooting things in the face til they die. The graphics and music are straight out of a saturday morning cartoon souped up on crack – in a good way. It is seriously like all the amazing stuff you loved about saturday morning cartoons rolled up into one. Honestly, the only drawback I found in the game is that it feels all too short despite its amazingness. 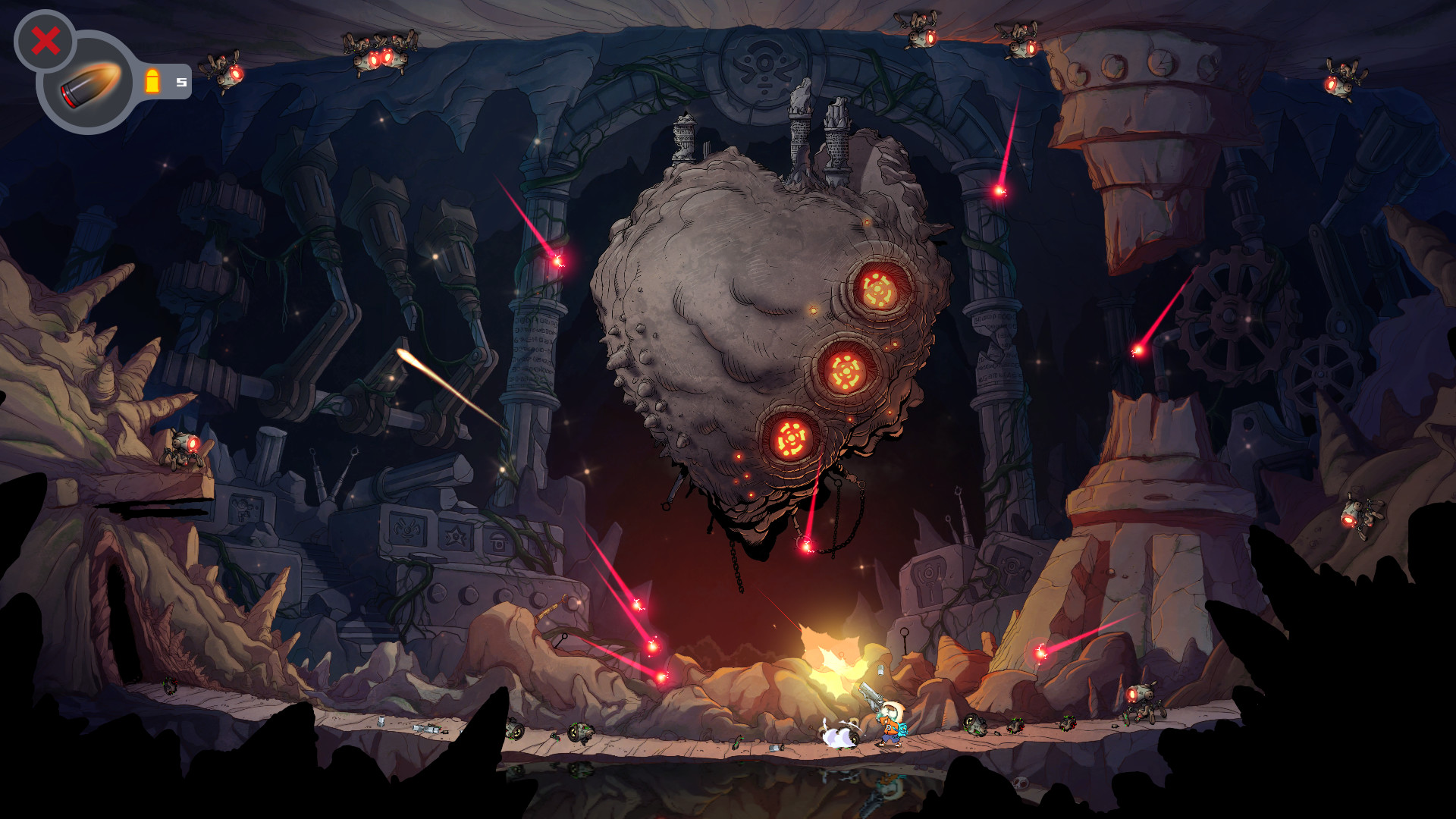 Rise & Shine can be finished as quickly as 2-3 hours, or as much as 10-12 depending on someone’s skill level, and if they want to 100% the game. By 100% I mean get all the achievements and find all the secrets. So is it worth the $14.99 USD price on Steam? Personally I would say yes, given I played it and loved it. I can see, however, if you are looking at it and never played it, nor seen it played, that you might be iffy about it. Lastly I will say this about any video game you’re looking at: Do your research and make sure it’s for you. For me, this game definitely is.