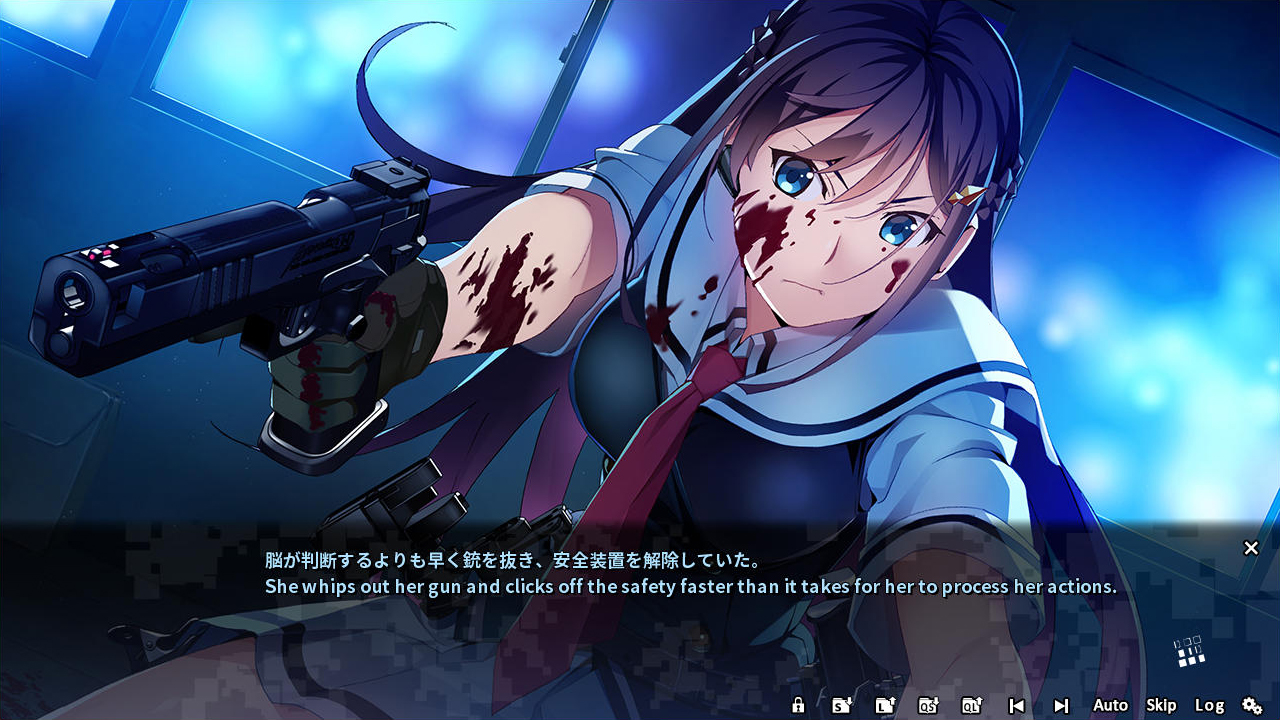 While my time with the Grisaia series has been brief, it has quickly grown on me as a visual novel because of how much detail and effort is put into them. Their rich stories, and interesting well developed characters, make the experience well worth a read; but what if we had the ability to look at the world of Grisaia through a different set of eyes? This is what Grisaia Phantom Trigger Vol.1 asks us to do. Grisaia Phantom Trigger Vol.1 is an action slice of life visual novel that was developed by Frontwing and later released by Frontwing USA, that while taking a risk on new characters in a familiar setting, keeps the same pacing, detail, and level of action that previous Grisaia novels made so memorable. 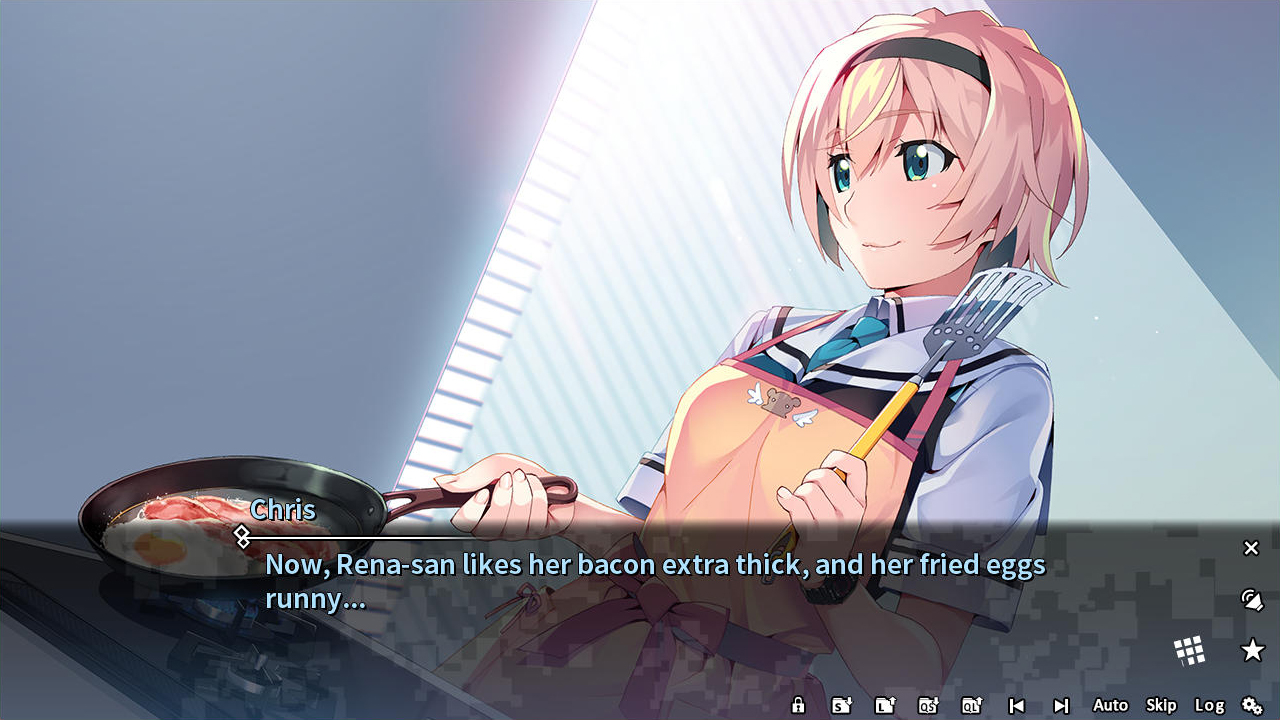 Loading the magazine and cocking the chamber, Phantom Trigger Vol.1 holds nothing back as a story as we are thrown right into the thick of things – but at the cost of some information early on. We, the reader, start off with a group of what seems to be three girls in a crowded city area trying to capture some fugitives on the run, but after an over-aimed shot from the sniper of the group kills one of the remaining two alive, we find out about the fourth, who also goes a little too hard and ends the mission in a negative status. We are then introduced to Arisaka Shiori, a woman driven to be a teacher that – even after 12 rejections – has come to Mihama Academy, which is her last chance to save herself from being homeless. After a brief walking tour, she come across two people in the gym who turn out to be the school’s Principal, and Haruto, a student at the academy in a kendo session, which she unfortunately interrupts not meaning to, prompting the Principal to prep for their meeting, and leaving Haruto to show her around. After meeting with the Principal and accepting the job, she is told that the students at Mihama Academy are not normal students, as she soon finds out with her class of Rena, Tohka, Chris, and Murasaki, the four girls from the start of the novel, who are a part of a group called SORD, with Haruto being their handler. I will end the story here as going any farther goes into spoiler territory, but I have to say as a story, it has a great premise and characters – with just a few notable flaws. 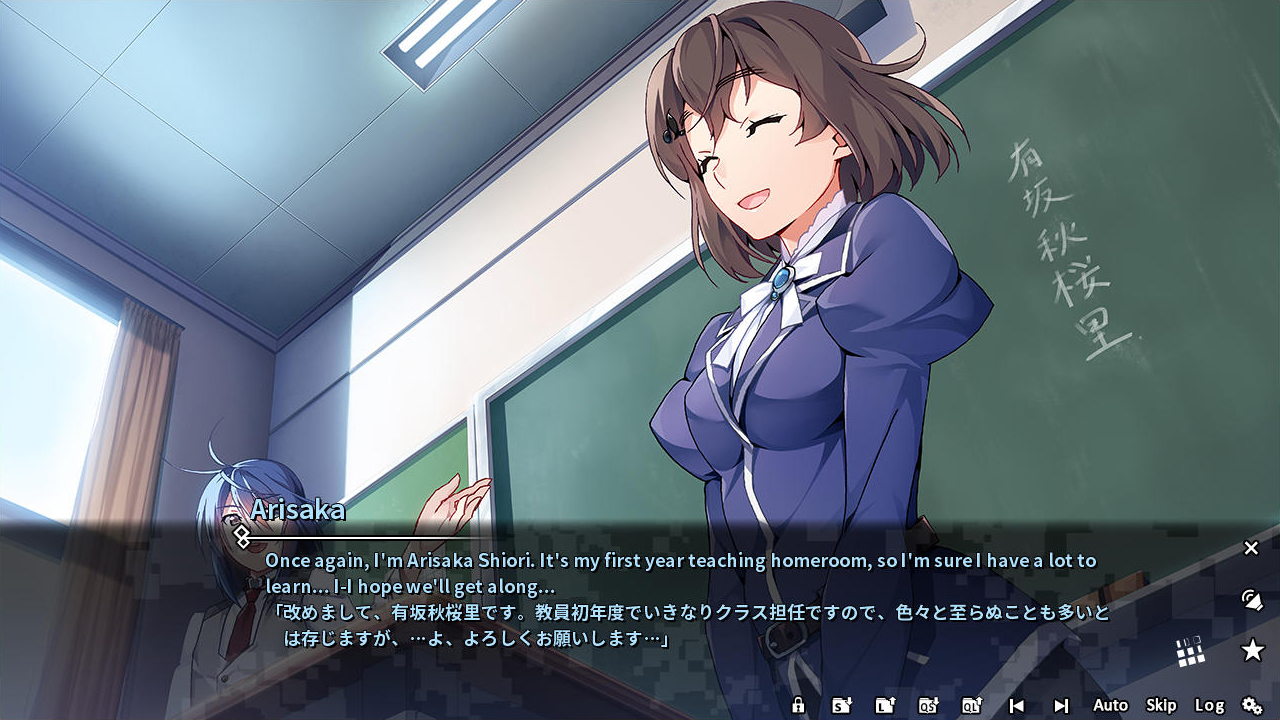 The story for Phantom Trigger Vol.1 is not perfect, with its biggest flaw in my opinion actually being the way the novel starts. I do enjoy a good action scene to start a novel, as it sets up so much of the pacing, but when we are given no information other than these girls failing, and then directly cutting to the character we will mostly follow who has no idea of the situation either, it tends to feel a bit lost. The scene itself was really well planned, as with so many other scenes in the novel, it helps develop the characters – but because it leaves this big gap between the characters and story, it feels out of place in the end. It makes me wish it had been given it to us as a follow up scene instead, after some basic information. 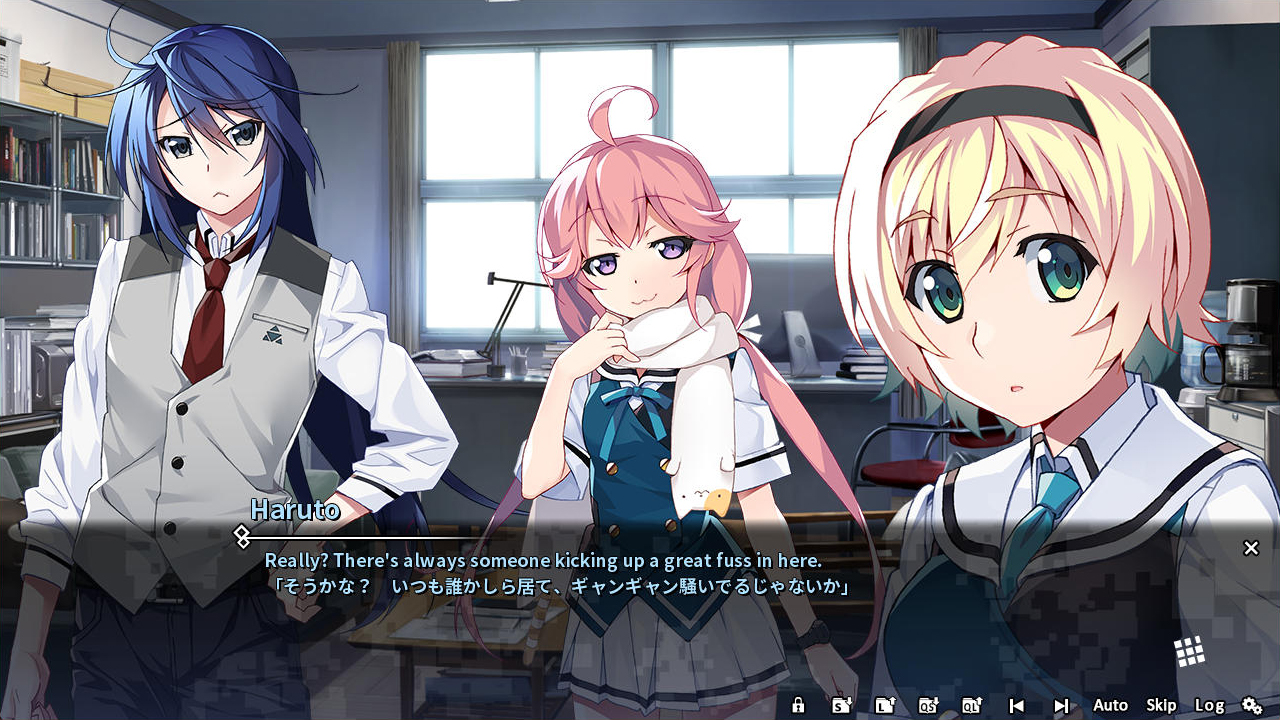 Chamber loaded and bullets fired, the presentation for Phantom Trigger Vol.1 follows that of the previous Grisaia novels with its anime realistic stylizing and memorable music to follow it up. Visually, Phantom Trigger Vol.1 is realistic in the sense of proportion and background, but keeps the anime flair of blood and action, which helps the novel keep its identity as a Grisaia novel. The backgrounds are well detailed and designed, there being fewer here than in previous entries into the series but never feeling dull at any one time. The characters themselves, are also a treat for the eyes as they keep a diverse look and feel about themselves that shows their unique personalities, even when they do not speak or are waiting to speak during a situation. The best case of this is Arisaka as she is shy, unsure of these girls and what they can do, but still gives an air of accepting their differences and growing with them, even when she is just listening to them bicker. 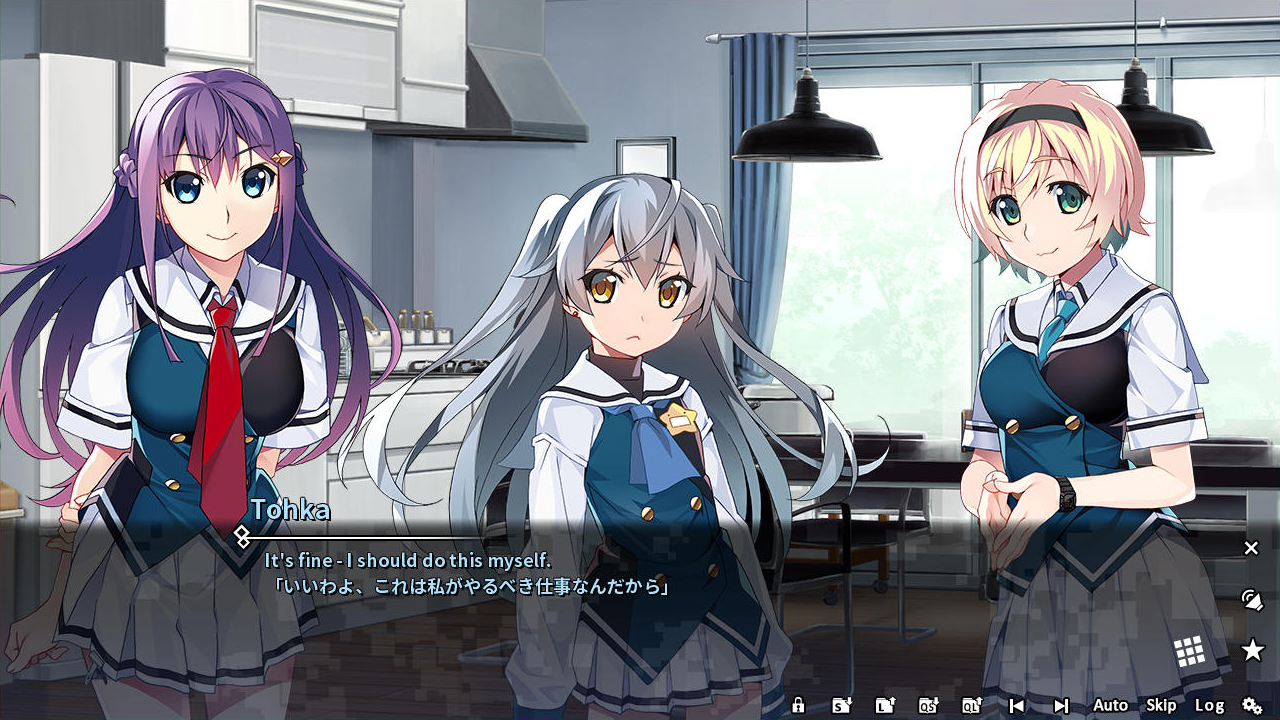 The classical music vibes are still as present as ever in Phantom Trigger Vol.1, adding in some newer notes to add to the action scenes of this series but somehow being less memorable than previous Grisaia novels. I enjoy the soundtrack that Phantom Trigger Vol.1 offers because it changes the pace with the action scenes as you get more of this high stakes, higher pitched notes to really sell the mood, but the traditional classical flare just does not have the same impact here as I wish it had like it did in the previous titles in the series. The sound effects were well used, something I felt was lacking in my previous Grisaia experience, so a big plus to Frontwing for making them more apparent. The voice acting is still as good as previous novels, only Haruto who, while being such a big character in the story, not getting his own voice acting left for some awkward moments as it makes for these moments of silence after you have a nice conversation between the girls that can ruin the atmosphere. 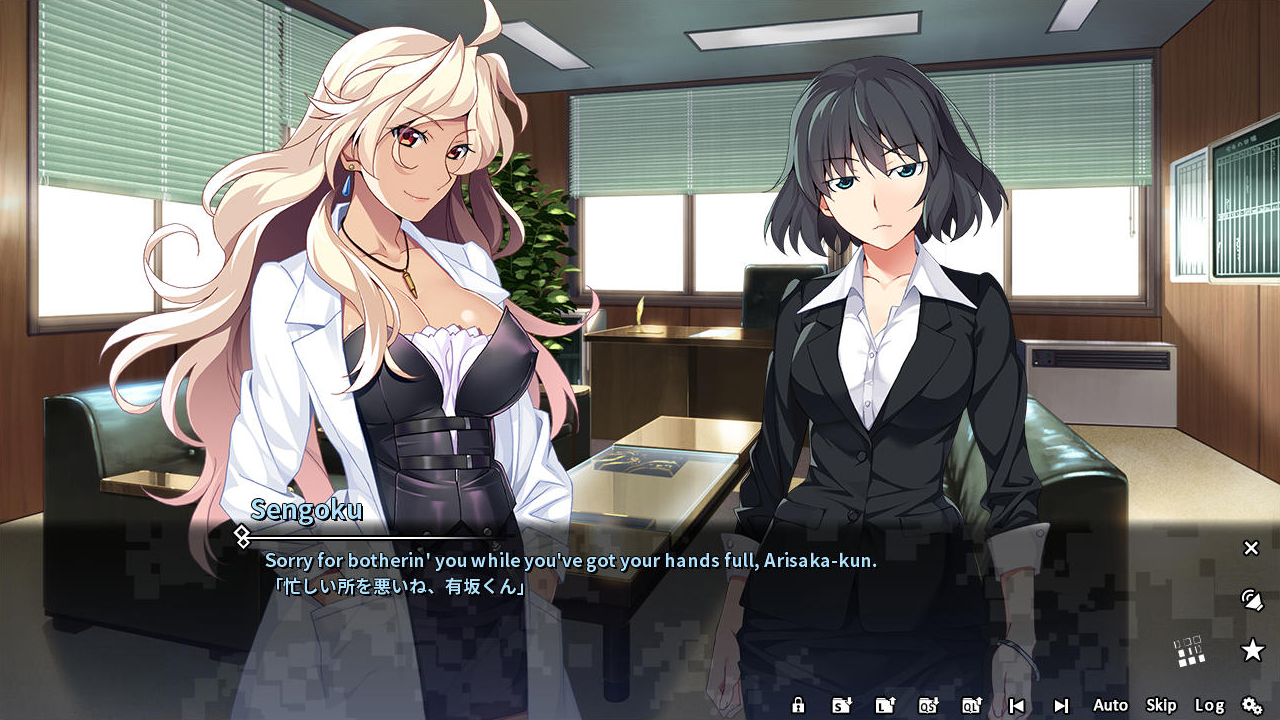 Overall, I found Grisaia Phantom Trigger Vol.1 to be a great reading experience from start to finish, even with the misstep with the introduction as it could confuse some readers for an otherwise well written story. The well written and presented story, expressive and unique characters, well done action scenes, strong visuals, the unique backgrounds for each location, memorable soundtrack, and well voice acted characters leave you with an impact you will not forget anytime soon.

For the price of $14.99 on Steam, I can especially recommend this novel to previous Grisaia readers as it carries over so many features from the prior novels, and those novel readers seeking a good action novel as this one covers that genre very well with its story.